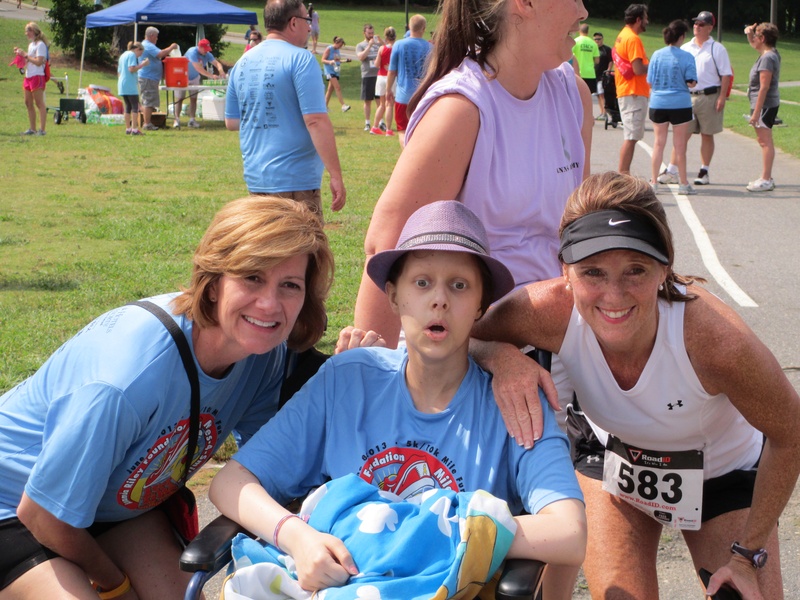 Our daughter Anna Mott was diagnosed suddenly in August of 2012 with a rare brain tumor, pineoblastoma. Absorbing the news was the most difficult thing our family had ever faced.  We were shell shocked as she was immediately transported by ambulance from Gwinnett Medical down to Scottish Rite. Not being able to ride with her, we flew home and threw some random stuff together in a bag. How do you pack for such a thing in such an emergent rush? Little did we know she and I (her mom) would not return home for 3 full months.

Anna went through several surgeries to save her life, a major infection and other events that almost stole her away from us, numerous times. Finally, we got out of the ICU and up to the rehab floor.  One day, I received a call from Barbara Riley. What a bright spot in such a time! She was telling me all about the Amanda Riley Foundation and the things they do to help families in a fight like ours and how their mission was to bring the smiles. She was so comforting, so encouraging. Here was someone who understood! Not only that, she was offering any help that she could provide to ease our burdens.

Anna finally came home the week of Thanksgiving. We were so ecstatic! Things were not the same though and the kids were really hurting.  Again, Barbara and the Amanda Riley Foundation were right on time to make them smile! One day she and some volunteers showed up at our house bearing Christmas gifts for our children. Anna is the oldest of 5 and the other children had been helping to take care of her and sacrificing so much. Barbara showed them they were not forgotten in all this and the Foundation provided things we couldn't at that time. What a blessing!

As the year continued, many times we would be so busy with doctor appointments and hospitalizations that we didn't have time to prepare dinner. Barbara and the Amanda Riley Foundation were right there numerous times with gift cards so we could get take out and sometimes bringing dinner to us. We spent a lot of time at the hospital on the cancer floor, Aflac. Each week we knew that the Amanda Riley Foundation would be there with a meal on Mondays. And let me say that when your child is that gravely sick, you don't even wanna run down to the cafeteria. You do not want to leave them in case something should happen. You want to be with them and not spend one moment without them for fear you will regret it later.
And then there's the toiletry bags. What a humongous blessing they are for providing them! So many parents are like we were. Thinking they are going in to the ER for an ailment that just doesn't seem right, only to find themselves in the cancer ward a few hours later, shell shocked and with nothing! Those toiletry bags are a life saver to us!

The Mott family would just like everyone to know that Barbara Riley and the Amanda Riley Foundation have done so much for our family and others who are fighting this terrible disease.  They are so very supportive to the patients and the families both. We are excited that Anna has finished her treatment and will be having her follow-up MRI on the 23 of September. As of this moment, she is cancer free. Our hopes are to get her well and help Barbara and this most wonderful organization that is truly bringing smiles to cancer patients and their families!

Special "thank you" this week to:

Eagles Landing Restaurant for donating 2 meals a month for our Meal Mondays at AFLAC Cancer Center at Scottish Rite.

Chick-fil-A on Hwy 124 in Snellville for donating  a meal a month for our Meal Mondays at AFLAC Cancer Center At Scottish Rite.

Become a Foundation Ambassador! Our Ambassador program is for students as well as anyone that is passionate about helping the foundation and ultimately, helping bring a smile to a child's face while battling cancer.  We need your passion and ability to spread the word about our foundation, help out at events and help us raise money for the kids. If interested call us at 678-871-8150 or send us an email at amandarileyfoundation@gmail.com.